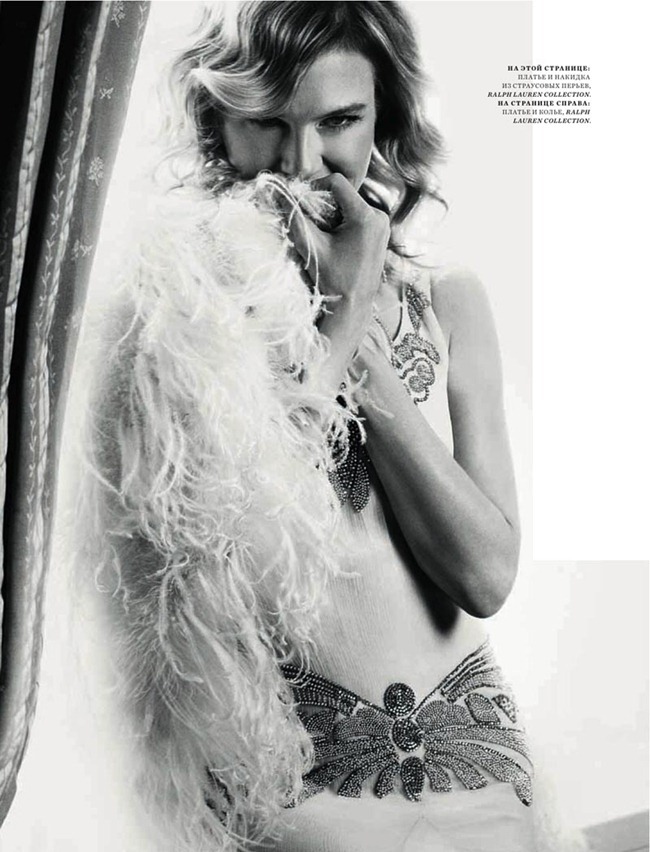 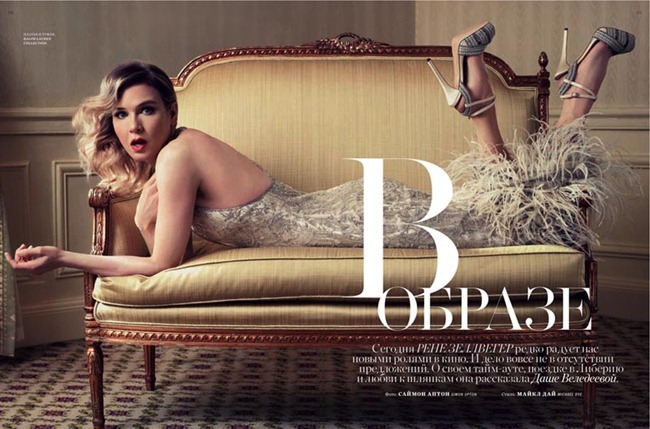 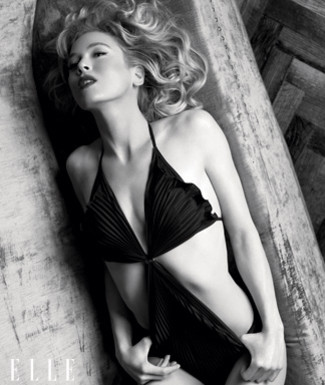 What do you do after your first big leading role, in 1996’s Jerry Maguire, catapults you into the public domain as America’s apple-cheeked sweetheart— and spawns one of the corniest and most irresistible lines in late-twentieth-century cinema: “You had me at hello”? It’s a testament to Renée Zellweger’s acting chops that over the next few years, she would do a send-up of that guileless innocence in the delirious Nurse Betty, and then in Bridget Jones’s Diary klutz it up, tart it up (with the hips and boobs that came with the 30 pounds she gained for the part), and outfit it with a dead-on English accent.
Nobody tugs at the heartstrings with more wit and winsomeness than Zellweger. She’s put adorable out of reach as the unsinkable gal from the wrong side of the crick (her Oscar-winning turn as Ruby Thewes in Cold Mountain). For Zellweger, determinedly upbeat and philosophical, every role is a milestone on an unfolding journey of self- discovery: “You know pretty much immediately if a movie needs to be a part of your life experience,” she says. “From every film I’ve done, I leave wiser and hopefully a little better as a person.”
For the shrewd director, the challenge is to tap into that hunger to charm the camera (you think it’s easy being adorable on demand?), that vulnerability that is the hallmark of her best work. Director Rob Marshall understood that for Chicago to succeed, the audience would have to fall in love with Roxie Hart—on paper, not so lovable, a wannabe vaudevillian so desperate to make it, she tries to leverage murdering her lover into a showbiz career. Zellweger, despite having virtually no experience in musical theater, threw herself into the role and almost sang and danced her way to an Oscar (she wuz robbed!). “Renée is the most disciplined person I know,” Marshall says. “She’s also a girl from Katy, Texas, who has become an international star, so I think she connected with the character. Although I don’t think she’d kill somebody to get there.” 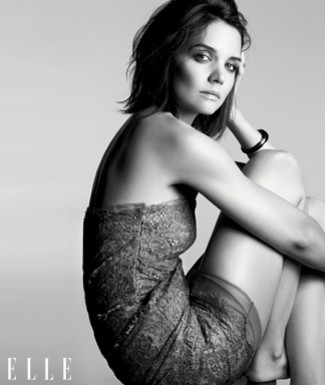 There’s a pivotal scene in Wonder Boys in which Katie Holmes as precocious coed Hannah Green, tells her professor, a disheveled, joint-packing Michael Douglas, that the novel he’s been writing for seven years is meritless and unfocused and, in essence, so is he. “I remember getting that great chill you get when somebody does exactly what you’d hoped,” says Curtis Hanson (L.A. Confidential), who directed the film. “That halting delivery because she didn’t want to cause him pain, but direct, with those open, honest eyes that she has. That is Katie and Michael going head-to-head.”
Before the wedding in Italy to a guy named Tom, there was Katie Holmes, the actor—an intoxicating mix of wholesomeness and feistiness that sent jocks, professors, and casting directors reeling. Girls wanted to be her friend or at least learn how to approximate her cheekbones. When a 17-year-old Holmes arrived in Hollywood from Toledo, Ohio, her mom would wait outside her auditions, then whisk her daughter off so she wouldn’t dwell on her performance. Not that she had much of a chance to. Holmes’ first outing landed her the role of Libbets Casey, the blue blood object of Tobey Maguire’s affection in Ang Lee’s The Ice Storm. “I didn’t even know what a mark was,” she says, laughing, “or that you had to do the scene over and over from different angles.”
Soon after, she was cast as one of the leads in Dawson’s Creek, playing tomboy Joey Potter, the Veronica to Michelle Williams’ Betty, who secretly pined for Dawson, her boy-next-door best friend. It was her first big paycheck. (She used it to buy a Tocca cardigan at full price, which she still has in her closet.) 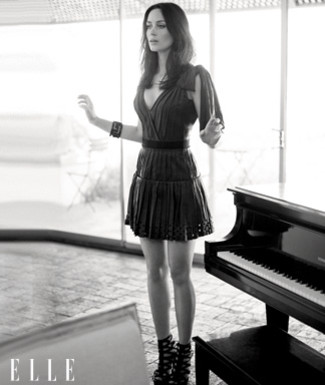 The actress has played teen, a queen, and every version of mean with the natural grace of a legend in the making

Emily Blunt has always had that name—and, as obvious as it may sound, it fits. “It makes me want to throw up in my mouth,” she says, when I suggest—like everyone else has—that her role in The Devil Wears Prada was “scene-stealing.” “The thought that I could possibly do that in a Meryl Streep film is insane! I find myself snorting derisively about that.” Such ardent humility is a total trip but can’t change the fact that as the bedraggled but well-dressed fashion assistant on the verge of an anorexia-fueled flameout, Blunt unwittingly stole enough thunder to bag a Golden Globe nomination. “I just had a good time,” she says. “I’ll let other people be the bird-watchers.”
The watchers know that two years before her Hollywood debut in Prada, Blunt blew away critics in the indie My Summer of Love (2004) playing Tamsin, a spoiled and recklessly manipulative teenager who lures an impressionable friend named Mona (Natalie Press) into her puffed-up world of quoting Nietzsche and swilling red wine. In Blunt’s first scene, she rides up to Mona atop a white horse and with chilling indifference informs her, “I’ve just been suspended—apparently I’m a bad influence on people.” You know instantly that Mona’s toast.
Blunt, now 26 (and recently engaged to The Office’s John Krasinski), has grown into a buoyantly charming, colorful talker who can’t tell a boring story: Each character gets an accent—a Texas cowboy, a Polish director, a rugged film-crew guy—to pitch-perfect effect. “I’m a big people-watcher, so I probably steal from everyone I meet,” she says. After Prada, Blunt played American (brilliantly, as the Brits would say) in starring roles as the French-spewing, hippie-hating, uptight Prudie in The Jane Austen Book Club and as Norah, the emotionally stunted rocker chick still living with her dad in this year’s indie gem Sunshine Cleaning. Under Blunt’s careful nurture, both the unlikable Prudie and misguided Norah seem sympathetically tormented; you simply fall in love with them. 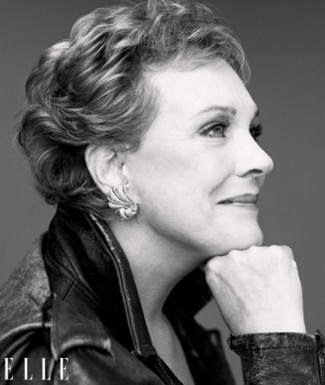 With a new host of thoroughly modern roles, the icon continues to enthrall her legions of fans as only a legend can

Domestic work never seemed like fun until Julie Andrews came along, forever elevating the enterprise. Who can forget her cruising London skies, brolly popped, as Mary Poppins (her first film role, for which she won the 1964 Best Actress Oscar)? Or singing the virtues of mittens and kittens in “My Favorite Things” as nanny Maria in The Sound of Music?
But Andrews has also embodied—more than she perhaps gets credit for—a whole range of women with amazing fluidity and understatement. There’s the crackling scorn mixed with deep empathy in the British driver she plays against James Garner’s swaggering U.S. lieutenant in the cult World War II classic The Americanization of Emily (1964); the bruised ego of the misled young fiancée to Paul Newman’s Cold War spy in Alfred Hitchcock’s 1966 film Torn Curtain; and always those moments—generously shot through movies from Victor/Victoria, directed by her husband, Blake Edwards, in which her struggling depression- era nightclub singer poses as a female impersonator, to the Princess Diaries blockbusters in which she played the gracious, good-time Queen Clarisse Renaldi—when, as she apprehends something new, a dazzling, sly smile lights up her face and her very real sex appeal snaps into focus.
“She can get you crying, and she’s got great comedic timing,” says Carol Burnett of her longtime “chum” Andrews, an official English Dame who always impresses her American friends by cursing with perfect diction. “It’s hard for people to disengage from Mary Poppins and Maria von Trapp, but she’s no Maria and she’s no Mary Poppins—she’s a down-to-earth broad, in the best sense of the word.”

For more on November's Issue of Elle visit elle.com